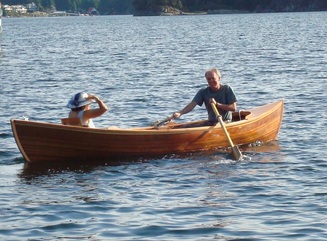 More details and to register 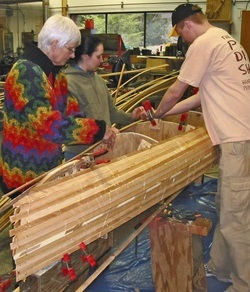 The ever popular Cedar Strip Boat Building class is offered by the Pender Harbour Living Heritage Society and taught by Rick Crook. The course emphasizes the utility and versatility of this technique.

In addition to the Cedar Strip class, the Pender Harbour Living Heritage Society has offered a Stitch-and-Glue boatbuilding class and another constructing a strip-planked Handliner fishing boat.

It is our desire to continue to put forward classes in various boatbuilding techniques and we are open to suggestions from the community about which classes and what formats would be useful to present.

Traditional Boats of the BC Coast
In November 2005, The Pender Harbour Living Heritage Society presented a lecture by noted marine archaeologist Charles Moore to a full house at the Pender Harbour Music School. Titled "Traditional Boats of the BC Coast," Charles' talk described and illustrated many of the little-known boats of the West Coast from the era of oarlock and sail. His depictions of handliners, gillnetting skiffs, sailing gillnetters and sealing skiffs caught the imagination of the 80-odd attendees and sparked spirited discussion during the  refreshment time that followed.

Getting Around The Northwest Coast, Circa 1700
On October 20, 2007 the Pender Harbour Living Heritage Society presented a lecture by Halfmoon Bay author Michael Poole at the PH Music School.  Michael kept a group of maritime heritage enthusiasts enthralled with his vivid descriptions of the building techniques and uses of coastal First Nations canoes. 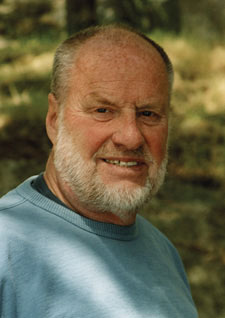 Michael Poole
In his words:  “There are few images from the history of this coast more evocative than Spanish explorer Juan Perez's account of groping through the fog off the Queen Charlottes in 1774 and finding himself surrounded by Haida canoes, a chief dancing in the bow of one and scattering eagle down on the water as a gesture of peace and welcome. The Spaniard was looking at what Haida artist, Bill Reid, more than two centuries later, would call 'as beautifully designed and decorated an open boat as the world has ever seen.' As Reid also observed, the massive cedar dugouts were profoundly utilitarian, the one thing you could not do without on this coast. So how were these craft built (essentially without iron tools) and by whom? How fast and far did they travel, and what could they carry? How did the designs vary for purposes as different as whaling and war, fishing and food gathering? These are just a few of the questions I've pursued out of an interest in building and paddling canoes that goes back more than 50 years. On October 20 at the Pender Music Center, I'll come armed with old photos, illustrations and first-hand accounts from this marvelous legacy we've inherited from the native people.”

He illustrated his talk with photos of both historic and modern canoes and went into detail describing regional differences in design, and in the uses for different sized craft.  He even brought an adze and several crooked knives so attendees could handle them and perhaps imagine what it would be like to construct a boat with such simple tools.  The group then broke for refreshments, with many lingering to discuss the talk and to socialize.