About Pender Harbour & its Maritime Heritage 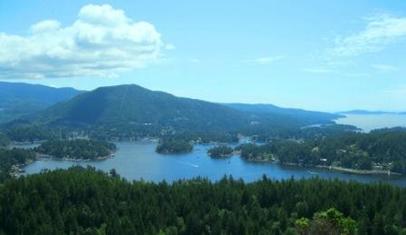 View of the harbour from Pender Hill
Pender Harbour is a community of about 2500 residents living in an area of sheltered bays and forested mountainsides about 70 km northwest of Vancouver. It is comprised of three distinct communities: Madeira Park, Garden Bay, and Irvines Landing.

For thousands of years, it was the principal winter settlement of the shishalh band, but after a devastating smallpox epidemic in 1865 most surviving inhabitants relocated to Sechelt. 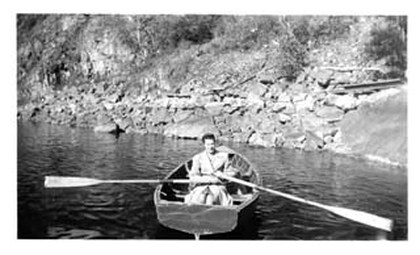 Alethea Brooks in a rowboat, circa 1945
Pender Harbour’s protected waters are fringed by an intricate shoreline. The names of the many coves and inlets hint of a colourful history: Whiskey Slough, Gunboat Narrows, Hospital Bay. In this unique place, pioneers lived at the water’s edge, always mindful of the great ocean that gave their home its life and meaning.

From 1900 until the early 1950s, Union Steamships delivered passengers and supplies to Irvine’s Landing, site of a busy hotel and general store. “Boat Days” was the highlight of the week for the locals - an opportunity to socialize while awaiting the steamship’s arrival with items they had ordered through the Woodward’s catalogue.

Starting in 1904 Coast Columbia Mission ships periodically visited the harbour and other remote communities to provide medical and spiritual care. After the opening of St. Mary’s Hospital in Garden Bay in 1930, work boats delivered injured loggers and fishermen from outlying areas to the hospital. By the 1950s, forestry boats were based in Madeira Park awaiting the call to fight forest fires in surrounding areas.

In the early to mid 1900s, logging and fishing were growing industries. Herring salteries in the harbour worked around the clock. Local shipwrights built boats for the fishing and logging industries and for recreational use. Boat building ways dotted the shoreline of the harbour in the 1950s when the industry was at its peak.

Women operated small “kicker” boats, and their finicky engines, to take their children to schools across the harbour until the first school boat ferry began in 1940.

It was a time of festivals. The Regatta, which began in 1947, featured boat races, diving and log rolling competitions as well as decorated boats. The Fishermen’s Homecoming celebrations in October welcomed fishermen back to the harbour after a summer’s fishing in northern waters.