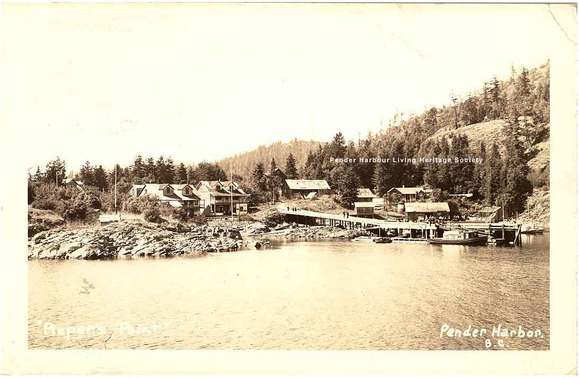 Irvines Landing circa 1939
The information contained in this writing is from my memories as well as those of Jean Braun, Joan and Carol Nichol, Marie Davidson. Other publications that have been most helpful are the May 2008 issue of the “Harbour Spiel”, “Bright Seas, Pioneer Spirits”, “The Little Green Valley” and “Women of Pender Harbour” as well as speaking to Isabel Gooldrup and Muriel Cameron. There may be errors or omissions and for any of these I apologize.

Having the opportunity to be born in Garden Bay and raised in Irvine’s Landing is what I consider to have been a gift. Family, friends, community were all rolled into one and all so very dependent on one another. Having attended the first six years of my schooling in a one room school house is a wonderful privilege and a memory that will never be forgotten. 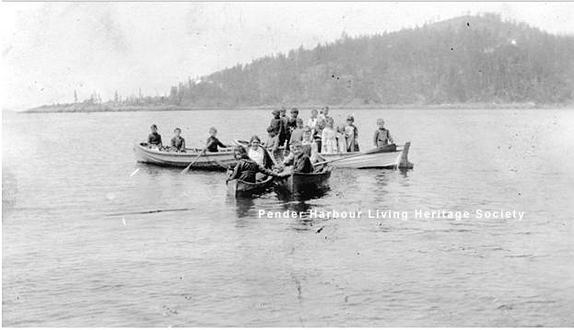 Children in row boats from Kleindale and Irvines Landing arrive at Donley's Landing to attend school circa 1917.
To give an idea as to how the community of Irvine’s Landing was at that time: the Sunday School was held in the sitting room of the Irvine’s Landing Hotel or on nice days outside in front of the store. There were no roads, only boats and trails between Irvine’s Landing, Kleindale, Madeira Park, Garden Bay, Whiskey Slough, Donley’s Landing (a.k.a. Hassan’s), Pope’s Landing (a.k.a. Muroch’s). Also frequenting Irvine’s Landing were people living on Texada Island, Nelson Island and up Jervis Inlet. When the Union Steamships would arrive, Irvine’s Landing would come alive, with people arriving in their little boats from all over bringing their goods to ship out as well as to pick up their mail, purchase fresh groceries that had just arrived and enjoy a visit or maybe go to the hotel for a meal or a wee drink or two. It was a bit of a social event. “Jervis Express”, “Gulf Wing”, “Lady Cynthia”, “Lady Cecelia” are a few of the many names of supply boats that would stop. The old hotel would come to life with the loggers and other passengers awaiting transportation to and from Vancouver. 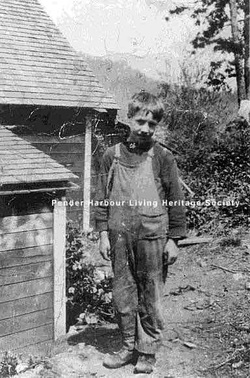 Ernie Lee at Donley’s Landing School 1919
A little history of early education in Pender Harbour shows children from Irvine’s Landing attending school at Donley’s Landing located across the water and some distance from Irvine’s Landing. This school was the original Donley’s Store donated by Mr. Donley as a school in 1915 after he built a new and bigger store. For the children of Irvine’s Landing the only transportation to and from this school was an often hazardous trip in row boats or canoes. Eventually the population of Pender Harbour had outgrown the school so Mr. Donley donated land for a new one and with a work bee that included families from all over the Harbour, had the school finished to open in the fall of 1920. Eventually this school expanded to include a high school. 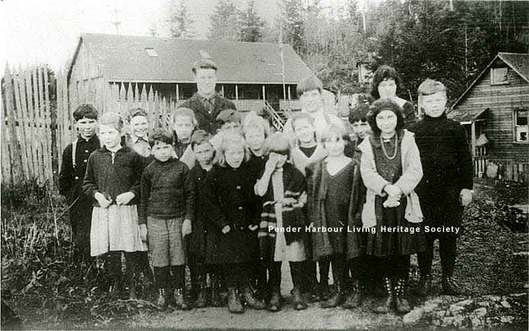 Class of Irvine’s Landing School circa 1921
The fall of 1920 was also the first year of operation for the new Irvine’s Landing School. A large converted bunkhouse located close to the Store and Hotel in the lower part of Irvine’s Landing. The first teacher was an F. McLean. This school ran from September 1920 to June 1930 and from what I can gather accommodated classes up to and including Grade 6. After Grade 6 they would find their way over to Donley’s Landing School to complete whatever education they were going to get. Students registered for the first class at Irvine’s Landing School were May Dames, June Derthick, Mildred Dirthick, Harley Duncan, Margaret Gonsalves, Theresa Gonsalves, Donald Keen, Peter Klein, Ernest Lee, Frank Lee, Norman Lee, John Cedric Myers, Evelyn Philips, Kenneth James Pope, Grace Thelma Pope and Arthur Thomas.


Teachers through the years were:

In 1929, in order to make up enough students to warrant having a school, Muriel Wray, Violet Dubois, Helen McHugh and Jean Braun were taken into Grade 1. Other students in that class were Nancy and Bob Lee, Julia, Scottie, Tiffy and Lenoard Wray, the Edwardson children, Leonard, Oliver and May Dubois, and Jack and Bert Gooldrup. This was the last year for the lower school in Irvine’s Landing as the old converted bunkhouse was not really suitable. 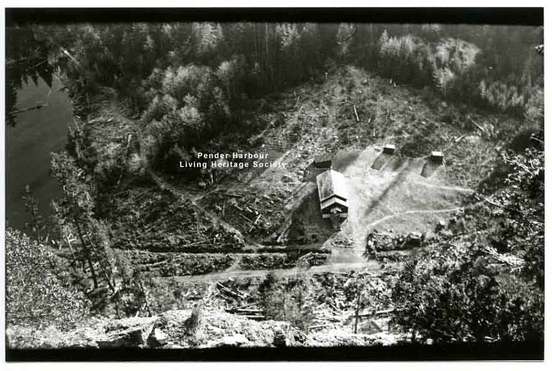 View of Irvines Landing School from the top of Pender Hill. Hotel Lake is at left. Circa 1930.
The push to get a new school was started. The family of Ole and Frida Lee had moved to Irvine’s Landing from Whonnock, B.C. in 1917. In Whonnock Ole had served on the Maple Ridge Council. Education and a good school in the community was an important priority so with this in mind Ole set out to convince Matilda Dames that property should be donated for a new school. Matilda's father, Joe Gonsalves, and her husband, Theodore Dames, donated the land where the present Sarah Wray Heritage Hall now sits and volunteers were now able to set to work to clear the land and construct the schoolhouse and 3 outbuildings. Jean Braun remembers one day there was a work bee to clear the playground which included a picnic with a keg of beer as well as ice cream Dixie cups packed in dry ice. At the time there was some concern regarding the location of the new school with its proximity to what was formerly called “Lee’s Mountain”, now Pender Hill, and the ever present possibility of an earthquake. This worry did become a reality in 1946 when an earthquake brought down a bit of a slide. Fortunately no damage or harm was done.

Teachers through the years were:

Entrance to the new school was a steep set of stairs at the front entering into a cloak room along the width of the building with a door on each end of the wall entering into the classroom. Coat hooks were provided as well as a place to put your boots etc. Inside the classroom, located at the back of the room, was the teacher’s desk on the left, a wood heater in the middle, and a sink beside the back door. In the beginning lighting was only the natural light that came through the windows. Eventually electricity came to Irvine’s
Landing and would assume that this was when the school was wired for electricity.

Jean related an event that occurred one Halloween. A group of pranksters, herself included, stuffed the chimney with gunny sacks. Upon arrival at school the next morning smoke was pouring out every door and window until Maggie Wray was able to get her son, Tiffy, to go up on the roof to remove the sacks. While up on the roof Tiffy spotted the culprits hiding in the bush laughing. Maggie Wray gave them a good talking to but no punishment was given.

Several rows of wooden desks mounted on runners faced the front of the room with blackboards surrounding three walls. The alphabet was neatly and carefully written and displayed above the front boards. A photo of King George hung on the wall until the Coronation of Queen Elizabeth in 1953 when it was replaced with a picture of her. I remember also in this year each student received a coin to celebrate this event. I also remember in the morning standing up beside my desk with hands to my sides, with a feeling of great pride reciting the Lord’s Prayer and singing the National Anthem. A fond memory is on our break, listening to Mrs. MacMillan reading an ongoing story to us each day while enjoying a nice hot cup of cocoa. Some students brought their lunches to school while others who could went home for a nice hot lunch. 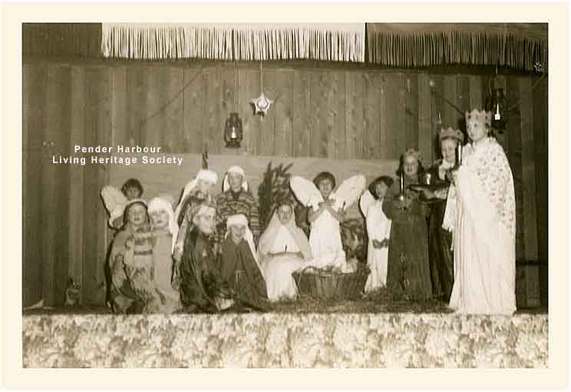 Irvine’s Landing Community Hall circa 1954 Annual Christmas Concert
There was also a piano and each year we would look forward and work hard in order to perform for the annual Christmas Concert at the Community Hall. A lot of practice would go into the choir as well as each child would have to be ready to either sing a solo or give a recitation. In the fall the community would hold bazaars followed by a dance to raise money for the Santa Claus part of the annual Christmas concert. There would be a gift for every child and baby in the community. The goods were ordered from Woodward’s or
Spencer’s store in Vancouver by mail order and would come in as freight via the Union Steamships. The ladies would make Santa Sacks from yard goods in green and red mesh and fill them with nuts, oranges and candy. As well as receiving the Santa Sack you would also receive a real gift of the value of $2.00. If the family of a child wanted to add some money of their own, a bigger gift could be bought. In these instances this type of gift would most likely be the main gift that person would receive for the whole of Christmas.
The above photos show the students enacting the Christmas Story for the audience and the right, the arrival of Santa Claus. 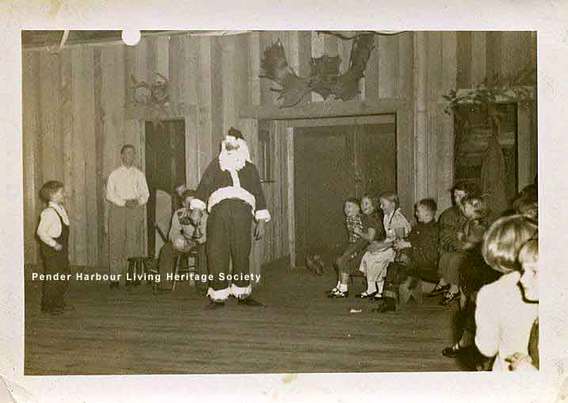 Irvine’s Landing Community Hall circa 1954, Annual Christmas Concert. Santa arrives.
Back to the school, games of football, soccer and baseball were enjoyed in the field but tag and skipping were the most fun. Swings, bars and teeter totters were on the other side of the school from the playground. The shed at the back of the school made the perfect stage for a game called “Anti Anti I Over”. A silly game of throwing a ball over the shed and if caught the person doing the catching would make a mad dash to the other side without being caught by your team members. There was an old peach tree and a side garden where Mrs. McMillan would hide decorated eggs for an Easter Egg Hunt. A flat rock at the side of the road provided the perfect surface for a good game of Jacks. “His” and “Her” outhouses were a distance away in the far corners of the school yard. I remember when new washrooms were installed as an addition onto the back of the school. This was sooo…. wonderful and MODERN!

Maggie Wray was the janitor. She would always ensure that the school was nice and warm and always kept everything in good order. Her husband, Charlie and son Tiffy, sawed the wood for the big wood stove. In the early years the beginning of the school year provided a chore for the students of raking all the stones that had accumulated over the summer. After Mrs. Wray retired a Mr. Chaster from Gibsons took over.

Sometime in the 50’s the school desperately needed new window coverings. My Dad, Norman Lee, smoked kippers and we went door to door selling these kippers. They were really soooo good they sold themselves and enough money was raised to buy new Venetian blinds for all the windows. 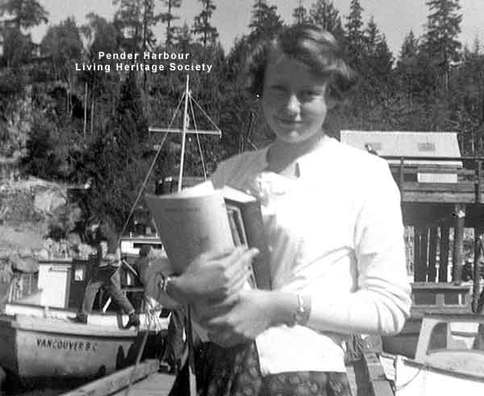 Linda Lee ready to board “Dakota Bell” at Madeira Park
Irvine’s Landing School closed in June 1960. J. Kent Barber was the last teacher. Students were Bobbie Fielding, Randy Siebert, Don Williams, Robert Williams, Orville Siebert, Douglas Fielding, Patrick Hay, Guy Deller, Colleen Piggot, Gail Deller, Trudy Hay, Nancy Shaughnessy, Nora Williams, Beatrice Hay, Mary Brown, Jackie Hay, Sandra Siebert, Joe Brown and Hazel Wray. A School Ferry, ran by Ray and Doreen Wilkinson, had been contracted by the School Board and all the students from Irvine’s Landing were ferried
to Madeira Park School. I remember the “Dakota Bell” but think that there was another before her for which I do not remember the name of. The new Pender Harbour Junior Senior High School opened in January 1958. The students from Irvine’s Landing continued to take the ferry where they would board the School Bus for the trip to Kleindale. A great deal of travelling was incurred that made for long days.