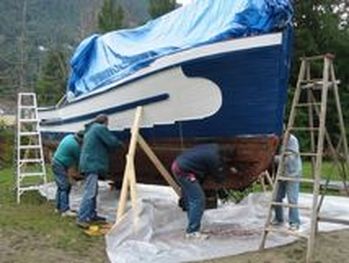 The team at work.
When the Chamber of Commerce wanted to enhance the entrance to Madeira Park by incorporating a wooden fishing boat into a garden display on Madeira Park Road, members of the Society spearheaded the repair and facelift of the double-ender.

Dry rot had consumed parts of the deck necessitating replacement of several sections, and years' accumulation of barnacles had to be removed.  A traditionally coloured paint job was applied to complete the project, allowing a part of the maritime past to welcome visitors and residents alike to Pender Harbour. 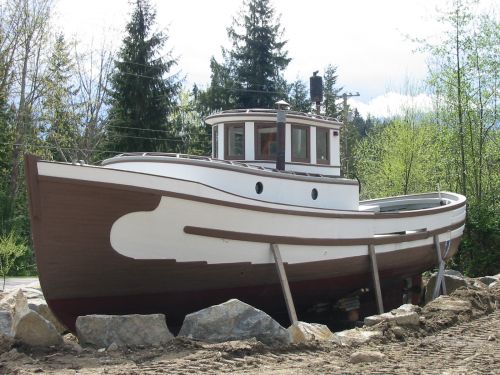 Restored beauty in her new home

Every couple of years, the boat at the entrance to Madeira Park gets some TLC. Showing true ‘Harbour Spirit’, members of the Pender Harbour Living Heritage Society spent the weekend of July 5-7 returning Madeira Park’s iconic entry boat to her best.  What was to be a two day wash-and-paint endeavour became a bit more complicated as a large number of wasps nests were discovered inside.  Much to the amusement of passers-by, workers could be seen Friday night garbed in mosquito suits and armed with hornet spray shooting bugs through small holes in the plastic used to seal up the boat.  Miraculously, they actually managed to kill most of them, leaving the rest of the weekend for the planned project. Good weather allowed the paint to dry, leaving the Harbour Spirit a ’Spiffy Skiffy’ indeed.